Will My Case Be Tried Before a Judge or a Jury?

The decision to have your case tried in front of a jury or in front of a judge is yours and yours alone.  Your lawyer can help you make the decision, but ultimately, it’s the defendant’s choice.  Put simply: a defendant has the option of having a judge or a jury hear the case.
The United States Constitution, as well as the Massachusetts Constitution, gives defendants in criminal cases the right to have their case heard by a jury of their peers. The law also allows a defendant to make an election allowing his or her case to be tried in front of a judge, without a jury. Our Massachusetts criminal defense attorney mentions that this is called a bench trial and is often referred to as a “jury-waived” trial.

What is a Criminal Trial?

Before we discuss the difference between the two options, there are a few things you must understand about a criminal trial. A trial is a structured process where alleged facts are presented to a group of people (a jury) or a single person (judge).  This group, or the person, is referred to as the “trier of fact” or “finder of fact.”  The alleged facts are presented to the fact-finder through evidence and their job is to determine whether some alleged fact really happened. Their job is also to determine, based on the evidence, whether the defendant is not guilty or guilty. During a trial, the function of the judge is to be a referee of sorts.  He or she will decide what evidence is going to be shown to the jury. The judge is impartial and there to make sure the trial is fair to both sides. A verdict of guilt or innocence in a jury trial must be unanimous.  That means everyone must agree.  If they don’t, it’s called a hung jury and the case must be tried again.

The Differences Between a Jury Trial and Bench Trial

Now that you understand on a very basic level how a trial works, let’s explore the differences between a jury trial and a bench trial. 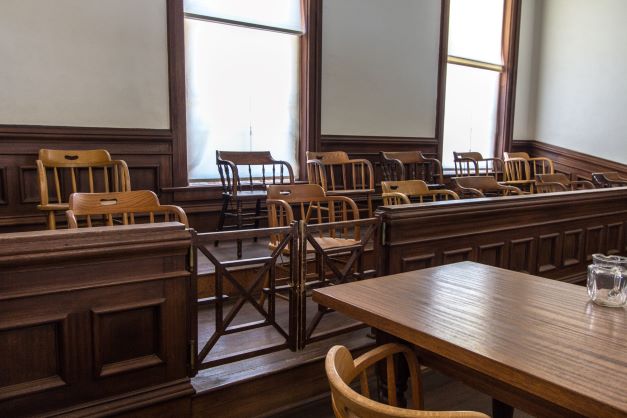 If your case is being heard in the District Court, the jury will be six people. Usually, there is an extra juror (sometimes two) who sits through the trial and listens to evidence but does not cast a vote on guilt or innocence unless one of the six jurors needs to be replaced. A case being heard in the Superior Court has a jury of twelve people, with two or more alternates being seated as well.  A jury should be a cross-section of the defendant’s community and must be fair and impartial.
On the other hand, if a defendant elects a bench trial, only one person—the judge, will be hearing the evidence and determining guilt or innocence. When a defendant makes this election, there are two requirements for the waiver to be valid.  First, the judge must ask the defendant some questions to make sure that the waiver is entered knowingly and intelligently. Second, a written waiver must be signed by the defendant and filed with the court. The judge must then approve the waiver and may refuse to do so for any good and sufficient reason.
When choosing between a bench trial and a jury trial, an attorney and their client must take many factors into account in evaluating this tactical decision.  Certain types of cases, such as first offense OUI cases, are sometimes heard in front of a judge. The identity of the trial judge is another important consideration.  Generally speaking, if the issues are highly factual—such as cases involving mistaken identity or those involving the credibility of witnesses, jury trials are preferred.  On the other hand, if the issues are purely legal in nature, the election of a bench trial may be a good decision. For example, in an OUI case, one of the elements the prosecutor must prove is that the defendant operated a motor vehicle.  If the theory of defense is whether the defendant’s actions meet the legal definition of “operation,” then that is something a lawyer may advise to bring in front of a judge rather than a jury. By the way, in Massachusetts, a person “operates” a motor vehicle while doing all of the well-known things that drivers do as they travel on a street or highway, but also when doing any action which directly tends to set the vehicle in motion.  So, if a person is sitting in a parked car that is turned on for heat, but not being driven, counts as “operation.”

There is no bright-line rule on whether to have your case heard by a judge or jury.  It depends on many factors, such as the issues in the case, the strength of the case, and the judge assigned to the trial.  Most cases that go to trial are heard by a jury. Often, however, counsel will mark a case for a bench trial when investigation reveals that the sole government witness, for whatever reason, will not appear at trial.  Because the mechanics of a bench trial are simpler than those of a jury trial, it is more efficient to dismiss a case of this nature after the Commonwealth must answer “not ready” because it doesn’t have its star witness.