What is Perjury in Massachusetts?

A. Using Perjury as Grounds for a Motion to Strike 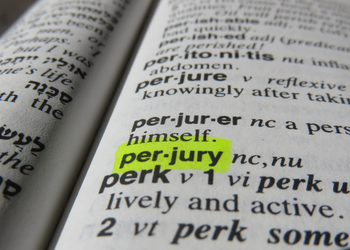 Anyone who has seen Law & Order or any similar courtroom drama is familiar with the prosecution (in reality usually the court clerk) asking a witness if they swear to tell “the truth, the whole truth, and nothing but the truth.”

While courtroom dramas are generally inaccurate depictions of the court system, our Massachusetts criminal defense attorney explains, this particular aspect of the proceedings is a fairly accurate representation of the duty of defendants and witnesses to tell the truth when under oath.

Perjury is generally defined as knowingly and intentionally lying about a material issue while on the stand under oath in court. Perjury is accompanied by serious criminal penalties. While perjury is usually dealt with as a separate criminal charge against the untruthful witness, the “perjury defense” is when a party in the existing case uses the fact that the witness was lying under oath to have their testimony stricken from the record or to allow the factfinder to consider evidence of the lie when evaluating the weight to be given to the witness’s testimony.

You may have seen the concept of perjury in the news recently in relation to the defamation case against media personality Alex Jones. Jones was confronted by the attorney for the opposing party—parents of a child who was killed in a school shooting who allege that Jones defamed them by claiming that they were paid actors and staged their child’s death—who asserted that Jones had lied under oath about his knowledge of certain evidence. In this case, the opposing party had proof that Jones had lied due to inadvertent disclosure of the evidence in question by Jones’s attorney.

While this was a civil case, the same principle applies in criminal cases as well: when a party has proof that a witness has lied on the stand under oath, the party can move to have the perjured testimony removed from the record via a motion to strike (or alternatively, such evidence that the witness is lying can be taken into account by the judge or jury when weighing the witness's credibility).

It is important to note that in this sense, the perjury “defense” is not like other typical affirmative defenses in a criminal case (insanity, intoxication, duress, etc.) in that it is not something that ultimately allows a defendant to avoid a conviction, but it is an effective tool in the context of a motion to strike to limit damaging testimony against a defendant when there is proof that such testimony was willfully and intentionally untruthful.

B. Defenses to a Perjury Charge

Massachusetts law explicitly allows for a defense to a perjury charge where the witness believed his false statement was true at the time that he made it, or that the falsity of the statement was the result of the witness’s good faith mistake or error. Trauma about the incident that resulted in the loss of memory or mistaken belief about the facts may also be a defense to perjury.

Additionally, under limited circumstances, if the defendant admits that his statement was false, that admission may save him from being prosecuted under the statute. However, because a number of factors will be considered before the defendant’s admission will save him from prosecution, a defendant should consult with a lawyer before making any admissions of false statements.

Whether you need to try to remove perjured testimony from the record via a motion to strike or whether you are seeking to assert an affirmative defense to a perjury charge, it is important to have a competent criminal defense attorney in your corner who understands the relevant law in these complicated areas. Contact experienced criminal defense attorney Nate Amendola today for any legal issues related to perjury.