Can you enlist in the US Military with a Drunk Driving Conviction?

Have you been arrested and charged with a DUI/OUI in Massachusetts? Our experienced Plymouth OUI attorney here at Nate Amendola Defense specializes in OUI DWI DUI Defense, license suspension law, and represents clients across Norwell, and the surrounding areas. We specialize in getting people through the courts and back on the road.

You can contact us online or call our office directly at 781-661-5450 to schedule your free consultation with one of our top-notch defense lawyers.

Arrested for Operating Under the Influence While in the Military

The military is run by the federal government and it’s strict when it comes to criminal convictions. Having a drunk driving conviction in Massachusetts may significantly decrease your chances of being permitted to join the military. If you have two or more drunk driving convictions, you may not be able to serve in the military. Drunk driving offenses are considered serious offenses in the military as they are viewed as being indicative of a substance abuse issue. If you have recently been arrested for a DUI, the best thing you can do is find a Barnstable criminal defense attorney and try to fight the charges so you can be found not guilty or even have the case dismissed.

However, it is important to note that even if you receive one of these outcomes, you might still need to report the arrest. When filling out forms for the military or military academies, make sure to read the questions carefully as some may ask if you have ever been “cited” or “arrested”. If you have already been charged with a DUI, to enlist, you may need to meet with a recruiter and initiate a waiver request. 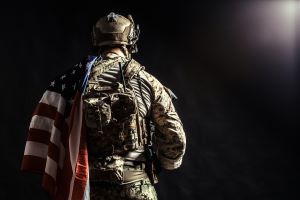 When meeting with the recruiter, it’s best, to be honest about the conviction and talk about any measures you’ve taken to change your behaviors since being arrested or convicted. Every military branch offers waivers; however, some branches are stricter than others. If applying to join the Air Force or Coast Guard, you may need to show that you’ve been sober for over five years since getting a DUI.

Can I Continue to Work in the Military After a Massachusetts DUI/OUI Conviction?

This answer really depends on the circumstances. Drunken operation of a vehicle is prohibited under the Uniform Code of Military Justice. Getting charged for a DUI in the military will not always lead to a dishonorable discharge, but it could. Penalties for drunk driving offenses for military members are often more severe than for civilians. Consequences however depend on a variety of things. If you are arrested for a DUI while off base, you can be charged both in a civilian court and in a military court. This means you could receive jail time and fines from breaking the law and also be charged by the military.

If you are arrested for a DUI while on base, you could be subject to martial law and administrative penalties. If on the base, you will not receive civilian criminal charges, but the state still has the authority to impose non-criminal penalties on you, including taking away your license or requiring you to use an interlock device (a system that does not allow you to start the car until a breathalyzer shows that you are not impaired). Consequences from the military could include fines, rank reduction, pay reduction, loss of security clearance, imprisonment, or dishonorable discharge. So, while a DUI Conviction might not lead to your getting discharged, it is a possibility.