Many arrests come from routine traffic stops. You would be shocked by how many people find themselves at the wrong place at the wrong time. It happens all the time. In the early morning hours, a police officer alleged that he saw my client approach a four-way intersection while driving, slow but not come to a complete stop, and pass through a stop sign. The officer turned on his overhead emergency lights and then stopped my client’s car. 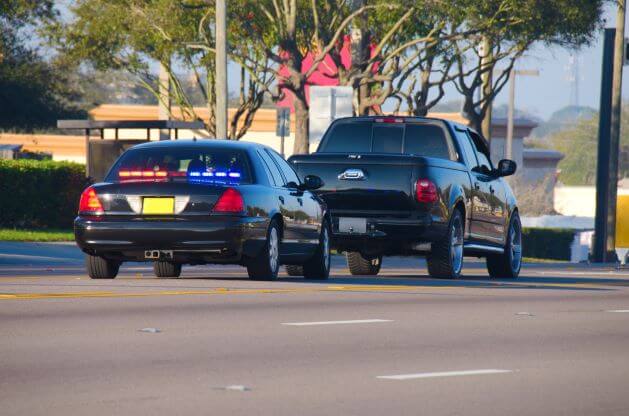 A “stop” is a very important moment for a citizen. In Massachusetts, the police may stop a car when the officer has “reasonable suspicion” that the occupants are committing, or are about to, commit a crime.  The police are also allowed to stop a car if an officer sees a civil motor vehicle infraction. Essentially, this gives the police virtually limitless authority to pull people over. Sunglasses hanging down from the rearview mirror? Expired registration decal on your license plate? Broken taillight or missing license plate light bulb? Excessively tinted windows? These are all valid reasons for a police officer to stop you.  What’s more, if the traffic stop was lawful, it does not matter what the officer’s underlying motive for the stop was.  That means that the police may use an observed traffic violation as an excuse for investigating other suspected wrongdoing or criminal activity.  For example, if the officer has a suspicion that the driver may be in possession of drugs, that officer can stop the car so long as sees a motor vehicle infraction, such as the wheels going over the white fog line on the right side of the road or speeding (even if it’s 5 MPH over the speed limit).

Once my client was stopped, he was “seized” within the meanings of the Federal and Massachusetts constitutions. This is important because the seizure (the initial stop) must be lawful. Remember: a police officer is justified in stopping a car if there is reasonable suspicion that the person stopped is committing, has committed, or is about to commit a crime, or if the officer has observed a traffic infraction.  Here, the stop appeared to be lawful because the officer saw my client commit a traffic violation by failing to stop at a stop sign.  What happened next, however, was illegal.

Arrested and Charged with Felony

The officer claimed that after he pulled my client over and spoke with him, he could smell a strong odor of burnt marijuana coming from his car. Based on that observation, the officer asked if there were drugs in the car.  My client then handed him a baggie of cannabis. Importantly, the officer made no observations of impaired driving or quantity of illegal drugs but, based on the “lasting strong odor,” ordered my client to exit his car to perform field sobriety tests. My client passed the field sobriety tests with flying colors, but the officer nevertheless frisked my client for a weapon.  He found an illegal, dangerous weapon concealed on the inside of my client’s sweatpants. My client was arrested and charged with a felony.

An Illegal Exit Order For My Client

The problem with what happened is that the police have only three legal bases for issuing an exit order to a driver or a passenger in a routine traffic motor vehicle stop. First, particularized suspicion of criminal activity; second, reasonable apprehension of danger to the police or others; or third, pragmatic reasons. None of these justifications applied when the officer issued the exit order to my client. Because the exit order was based solely on an odor of freshly burnt marijuana and without reasonable suspicion that more than one ounce of marijuana was present, the exit order was illegal.

Illegal Stop and Search Leads To Case Dismissal in Massachusetts

When a defense attorney believes that a stop and search is illegal, the proper way to challenge what happened is through a pretrial motion to suppress based on the 4th Amendment to the Federal Constitution and Article 14 of the Massachusetts constitution. A hearing will be conducted, and the judge will decide whether what happened was constitutional. If it wasn’t, the judge will suppress the fruits of the stop of the search, meaning that they cannot be used as evidence. I was sure that the arresting officer violated my client’s 4th amendment rights, so a filed a motion to suppress. This case was a winner, and the Commonwealth knew it. The case was dismissed without having a hearing, and my client has no record.