Free Case Evaluation
I recently won a case that involved misdemeanor and felony charges of domestic violence and witness intimidation.  If my client was convicted, he would probably have very serious immigration consequences. The threat was real, and the facts of this case were difficult: my client’s wife claimed that she was assaulted after declining to have sex with him. According to the wife, she tried to call 911 but he grabbed the phone out of her hand before she could tell dispatchers what happened.  I listened to a recording of the 911 call and couldn’t make out what the wife was saying. The dispatcher, however, apparently heard something different and claimed that before the call disconnected, the wife said that her husband was beating her.  To make matters worse, a neighbor who had heard a commotion from my client’s apartment also called 911.  When the police arrived on the scene, they spoke with the wife who told them what happened. We were facing an uphill battle, but then we caught a lucky break that later gave me the opportunity to make an argument using the United States Constitution.

Here’s how it worked.  In Massachusetts, there is a legal doctrine called marital privilege.  Under marital privilege, a married person cannot be compelled to testify against his or her spouse. In most situations, the prosecution can, for lack of a better word, force a witness or victim to testify. So, for example, if a boyfriend is alleged to have assaulted his girlfriend and she tells this to the police, she cannot then turn around at the time of trial and refuse to testify.  If the prosecution wants to go forward with the case, they can require her to testify.  That would not be the case if someone invoked the marital privilege, however. Using my case as an example, the Commonwealth wanted to prosecute the case fully, but my client’s wife asserted her marital privilege which meant they couldn’t force her to testify. Without her testimony, the prosecution would have a difficult time proving its case and I thought that would be enough to get case the case dismissed.  I was wrong. After some negotiation, the Commonwealth told me that it still wanted to pursue the case against my client and that it would use the statements that my client’s wife made to the police. In other words, the prosecution said they didn’t need her live testimony at trial and would instead have the police officer testify as to what the wife said. This is where the real opportunity to win came from. 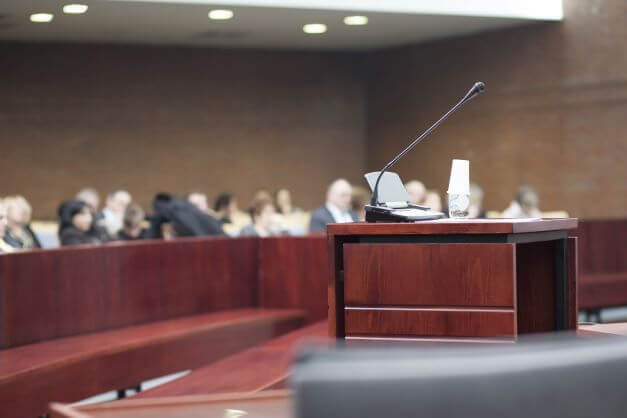 Under the Sixth Amendment to the Constitution, a criminal defendant has the right to confront witnesses against him.  In plain English, that means that a defendant has a right to cross-examine people who are accusing him of some misdeed. This is a foundational aspect of our criminal justice system.  In my case, the prosecutor was trying to use the out-of-court statements my client’s wife made to the police against him at a trial.  I believed a court wouldn’t allow this for two reasons.  First, because the out-of-court statements were hearsay and didn’t fall within a hearsay exception.  And second, because the statements would violate the Confrontation Clause, as I would not have an opportunity to cross-examine his wife on account that she invoked her marital privilege.
I wanted to make sure that the statements she made to the police could not be used in trial, so I filed a motion in limine. A motion in limine is a request to the judge to exclude certain evidence or testimony at trial.  If the judge allowed my motion, the prosecution would have no way to continue with its case because, as we know, the wife wasn’t going to testify, and the statements made to the police would be excluded.

I relied on a very important case from the Supreme Court called Crawford v. Washington. In Crawford, the Supreme Court held that if a witness makes a testimonial statement and then later becomes unavailable to testify in court (like my client’s wife), that statement cannot be used as evidence unless the defendant had an opportunity to cross-examine the witness.  Because I was negotiating with the prosecutor, I knew that he would claim the statements made to the police were made during an emergency and would be admitted on those grounds because they were not testimonial in nature.  So, what are testimonial statements?  Testimonial statements are those made in circumstances in which the primary purpose of the interrogation is to establish or prove past events potentially relevant to a later criminal prosecution. I found a case from Massachusetts addressing my issue—when the police started asking my client’s wife questions about what happened, the emergency was over and the statements were testimonial because, the case said, a reasonable person in the wife’s position would anticipate the statements being used against her husband in investigating and prosecuting a crime.

I drafted my motion and discussed it with the prosecutor.  He agreed that if a judge agreed with my argument, the Commonwealth wouldn’t be able to move forward with the case because they’d have no evidence. The next time we were in court, the judge asked the prosecutor if the wife still wished to maintain her marital privilege (she did), and the Commonwealth had to answer not ready for trial because it had no evidence.  The case was then dismissed.