Does Massachusetts have an Open Container Law?

In Massachusetts, it’s against the law to have an open container of alcohol while driving.  Open Container Laws refer to having open containers of alcohol in the passenger areas of the car while driving. For an alcohol container to be opened, it means the seal has been broken, or some of the contents have been removed. Thus, if you opened up a bottle of wine, once the seal is broken, it is considered to be “open”.

What’s the difference between a Criminal Offense and a Civil Violation?

Criminal offenses are acts that are against the law. They result in misdemeanors and felonies which can lead to jail time and fines and also remain on your criminal record. Civil violations are less serious than misdemeanors. While they do involve disobeying a statute or policy, the punishment is usually only a fine and does not go on your criminal record. There is no finding of guilt or innocence in a civil violation. A civil violation could, however, go on your driving record and affect your insurance.

What Will Happen if you are Caught Driving with an Open Container? 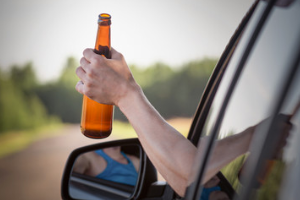 If a police officer pulls you over and sees an open container of alcohol, you will receive a ticket and have to pay a fine. The fine will likely range between $100-$500 depending on your driving record and if this is your first offense or you’ve previously been cited for driving with an open container. It could also depend on whether you were driving recklessly and why the officer pulled you over.

A police officer who cites you for an open container might also suspect that you are operating under the influence (“OUI”). If that is the case, the officer might ask you to perform a breathalyzer test or a field sobriety test. If you are arrested then for OUI, later on, if it ever goes to trial, the open container can be used as evidence to show you were operating under the influence.

What if the Driver is Underage?

If You Have An Additional Question Or Need Legal Representation,