What Is the Process in a Massachusetts Domestic Violence Case?

Once you have been arrested on charges of domestic assault and battery (in Massachusetts, the technical name for this crime is Assault and Battery on a Family Member-G.L. c.265, section 13M) you will be required to appear in court to defend the allegations against you. These accusations can have a significant impact on your life, so it’s vital that you understand the potential consequences of conviction and have someone by your side to protect your rights. 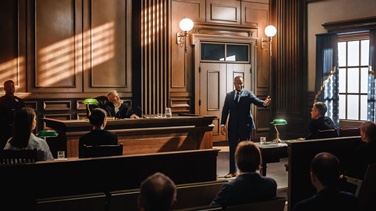 Most domestic disturbances that are reported to the police will result in arrest, since the state law authorizes warrantless arrest in these incidents. From the moment you are arrested, you are at risk of giving incriminating information to law enforcement and making mistakes that could damage your case.

An experienced Massachusetts domestic assault defense attorney can protect you at each stage of the criminal court process, including:

Your arraignment is your first court date. After you are formally advised of the charges against you, the court will determine whether you will be released from jail until the trial. You may be released without bail (on your own personal recognizance), on bail at a certain amount of cash set by the court (this may be in combination with conditions of release, such as a promise to stay away and not contact the alleged victim), held in jail without bail until your next court date. Most people charged with a first offense misdemeanor domestic assault are released on cash bail or their own recognizance with a promise to appear at every court date and not commit any offenses while on bail. If you have been charged with assault before or have other convictions on your record, the prosecutor may request a dangerousness hearing to move that you be held without bail for a significant period of time.  If the judge makes a preliminary ruling that you pose a danger to the alleged victim and the community, you will be held until the dangerousness hearing.

At the hearing, the prosecutor will present evidence in the form of witness statements, police reports, testimony, and your prior charges to show that your release would pose an imminent threat to the community. If the court agrees that there are no available options other than incarceration that would keep the public or the victim safe, you will be held until the trial date or 120 days, whichever is sooner.

After the arraignment, your attorney and the prosecutor will present evidence in front of the judge to see if there may be a way to resolve the case without a trial. Your attorney uses this time to explore weaknesses in the Commonwealth’s case, such as potential violations of your 5th Amendment rights or any marital privilege that could prevent your spouse from testifying against you. Depending on the charges against you, there may be more than one pretrial conference. These hearings may conclude in a number of ways: dismissal of the charges against you, pretrial probation with a dismissal (upon completion of certain conditions), or admission or plea, such as a Continuance Without a Finding. Once you have entered a plea to the charges against you, the case will proceed to trial.

A motion is a legal argument your defense counsel makes in front of a judge before the trial. At a motion hearing, your defense attorney will object to the use of any evidence that was collected in violation of your rights. If the motion to suppress evidence is successful, that evidence will not be admissible at your trial. Your attorney may also have the opportunity to cross-examine the arresting officer to see if there were any procedural errors in the case against you.

If the case has not been resolved through hearings, a trial will be scheduled. At trial, the Commonwealth may supply any evidence against you that has not been suppressed, such as testimony from independent witnesses or statements or admissions you made to the police. Your trial may take place before a judge or be decided by a jury—and you will need your attorney’s advice as to which trial offers a better chance at acquittal.